Next to the settlement Batvači is the impressive basilica of St. Fosca, an important cultural-historical monument which given its size was erected further from the settlement and the present day holiday houses. There is no documentation from which it can be concluded when it was built. The existing basilica of St. Fosca is located not far from the prehistorical fort. It was built as a triple naved basilica with lateral naves, almost as high as the main nave. Three pairs of semicircle arcades separate the main nave from the lateral walls. The eastern arcades are bigger than the others and rest on rectangular monolith columns, while the other arcades rise from massive bricked columns. On the eastern side, the somewhat narrowed back wall ends with three apses of a rectangular floor plan which in demicalottes pass over trompes. In each apse there is a walled altar illuminated through a window in the centre of the apse. The semicircle apses are encapsulated in a rectangular space and are not visible from the outside.

The characteristics of the church structure and its proportions have led experts to define it as pre-Romanesque, that is, they dated the building from the period of the early Middle Ages. The manner of decorating the facade with a motif of shallow, hanging arcades is characteristic for Romanesque architecture. Given that it has been indisputably determined that the floating arcades are the same age as the construction of the church, the entire building should be deemed Romanesque or early Romanesque. The Church of St. Fosca is “architecture without an architect”. This is evident in numerous rustic details: each window is a different size, the “capitals” of the arcade are ordinary panels of attached carved stone which means that skilful stonemasons did not participate in its construction. It should be assumed that the master builders built the church following the pattern of some other, older church, probably from the immediate vicinity. Maybe it was actually the somewhat larger triple naved basilica near Guran, built in the 8th century. In terms of space, the Saint Fosca and the basilica in Guran are almost identical. The only element that differentiates them is the greater expanse of the “presbytery” bays in the Church of St. Fosca. In any case, the builders attempted to follow the details of the architectural language of the times, the early Romanesque style. These are the floating arcades which they, a bit awkwardly, descending into the wall in the arcade field, executed on the front and back walls of the church. All of this tells us that the church was built, probably at the turn of the 11th to the 12th century, which means just before its interior was decorated with exceptional wall murals. Therefore, the church was probably built by local masters, however the wall murals were created by experienced painters who came to Istria from distant regions not long after it was built, and this is the most monumental example of Romanesque wall art in Croatia. The iconographic and style characteristics of the wall murals were excellently explained by Branko Fučić. It’s difficult to add anything to his interpretation: “The impression of the artwork on the triumphal arch is very impressive and monumental. This impression imposes itself on the viewer already in the symmetrical primary display which is incorporated inside the architecture, emphasising with its axis the conclusion of the central axis of the church body and adding itself above the vertical axis of the main apse. In the middle of this composition is the hierarchical frontal image of Christ sitting on a throne, surrounded by precious stones. With his right hand in front of His chest Christ blesses according to the Eastern rites, while His left hand is resting on a open scroll, resting on His knee. He is surrounded by a large oval mandorla, carried by four angels with long wings. At the bottom, left and right, are two symmetrical groups, each with three apostles. They’re standing and with heads held high are observing the scene floating above them; they’re gesticulating in wonderment, one moreover, in affect grabbing the nape of his neck, another obscuring his view before the splendour of the scene. This scene is taking place before a background divided into a number of horizontal bands. At the bottom, in the background behind the apostles extends a wide green band (earth), above it a yellow then blue one, and then – in the background of the upper pair of angels – there is a red one, surrounded by precious stones, and finally at the top shines a light, white band, all inwrought with horizontal wavy red and blue lines which indicated an open heaven.” In front of the facade are pilasters and arches of a large votive portico – lopica, which up to the 50’s of the past century had a preserved roof. The Medieval church was expanded in the Baroque period, in the 17th and 18th centuries. This spacious lopica, one of the largest if not the largest in Istria, tells us that in the past, on feast days a great many of the faithful would gather, for which an undercover portico was properly paved with large stone slabs and equipped with comfortable stone benches in the interior.

The former appearance of the church was significantly altered in the reconstruction which lasted from 2000 to 2004. Returning the basilica style properties to the church building changed, to a great extent, its exterior volume and contours which generations had become used to throughout the centuries. In return the church was given more elegant proportions and, what’s more important, the original lighting of the central area through the windows at the top of the main nave was once again restored. On the thick wall columns some of the older covering plaster was preserved in which one can see etched graffiti. Discernable are drawings of a sailboat, birds, while there are mostly parallel vertical lines in a row: this were the “records” of masses served or prayers held.

St. Fosca is a very popular saint in Istria, therefore every first Sunday after the 13 February (the Feast day of Saint Fosca) believers from everywhere make pilgrimages to this church. At one time pilgrims from afar arrived on foot and in wooden carts with harnessed donkeys, and more rarely horses: Today it is rare that anyone walks, while the carts have been replaced by cars. Traditionally after the mass, meals are eaten in the surrounding meadows, most often fried eggs with homemade sausages (frittata), right up until the sunset. In recent times, visitors bid farewell to their visit to St. Fosca by strolling to “tri kažuna” (a kažun is a traditional circular stone hut). 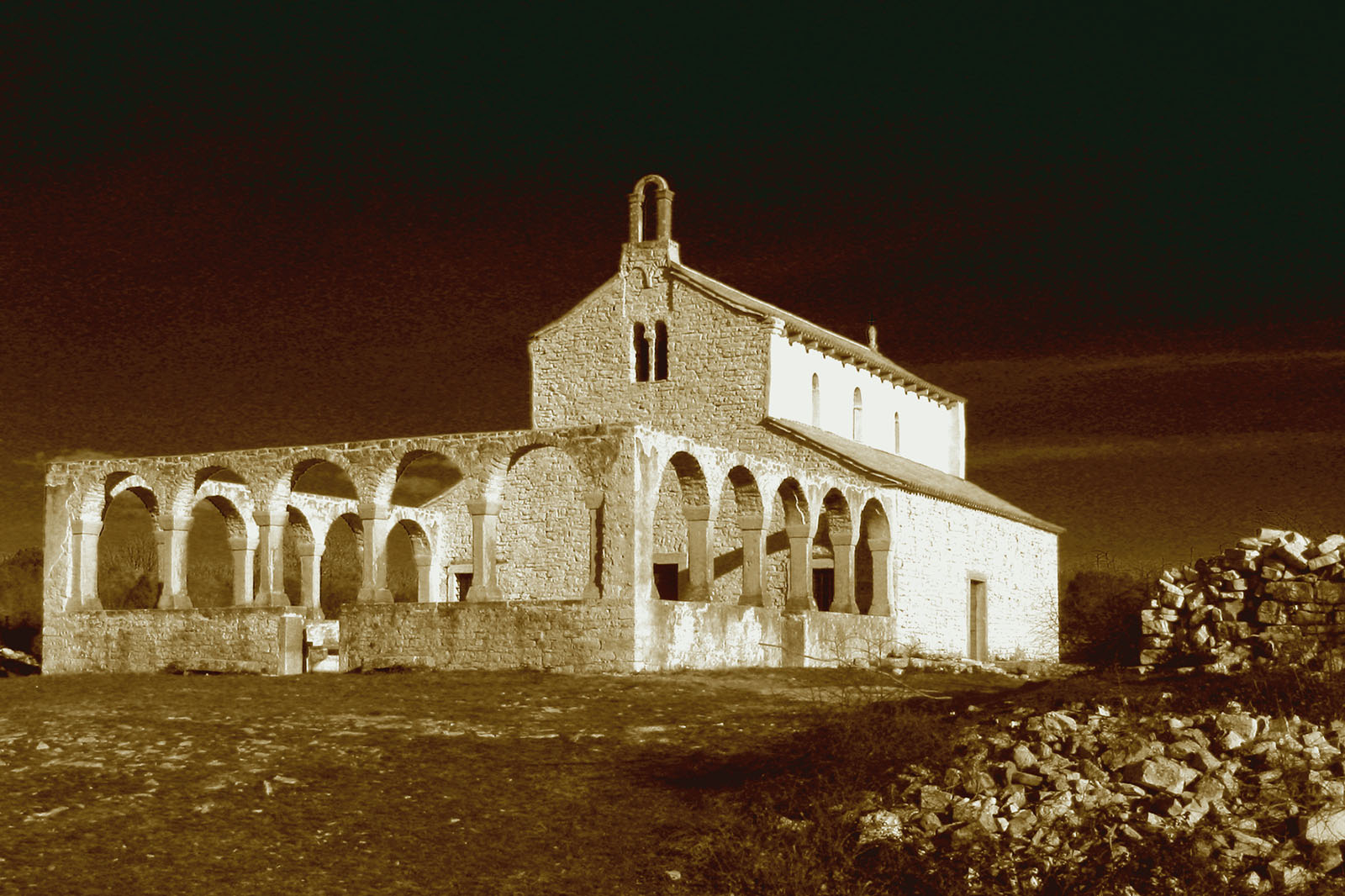 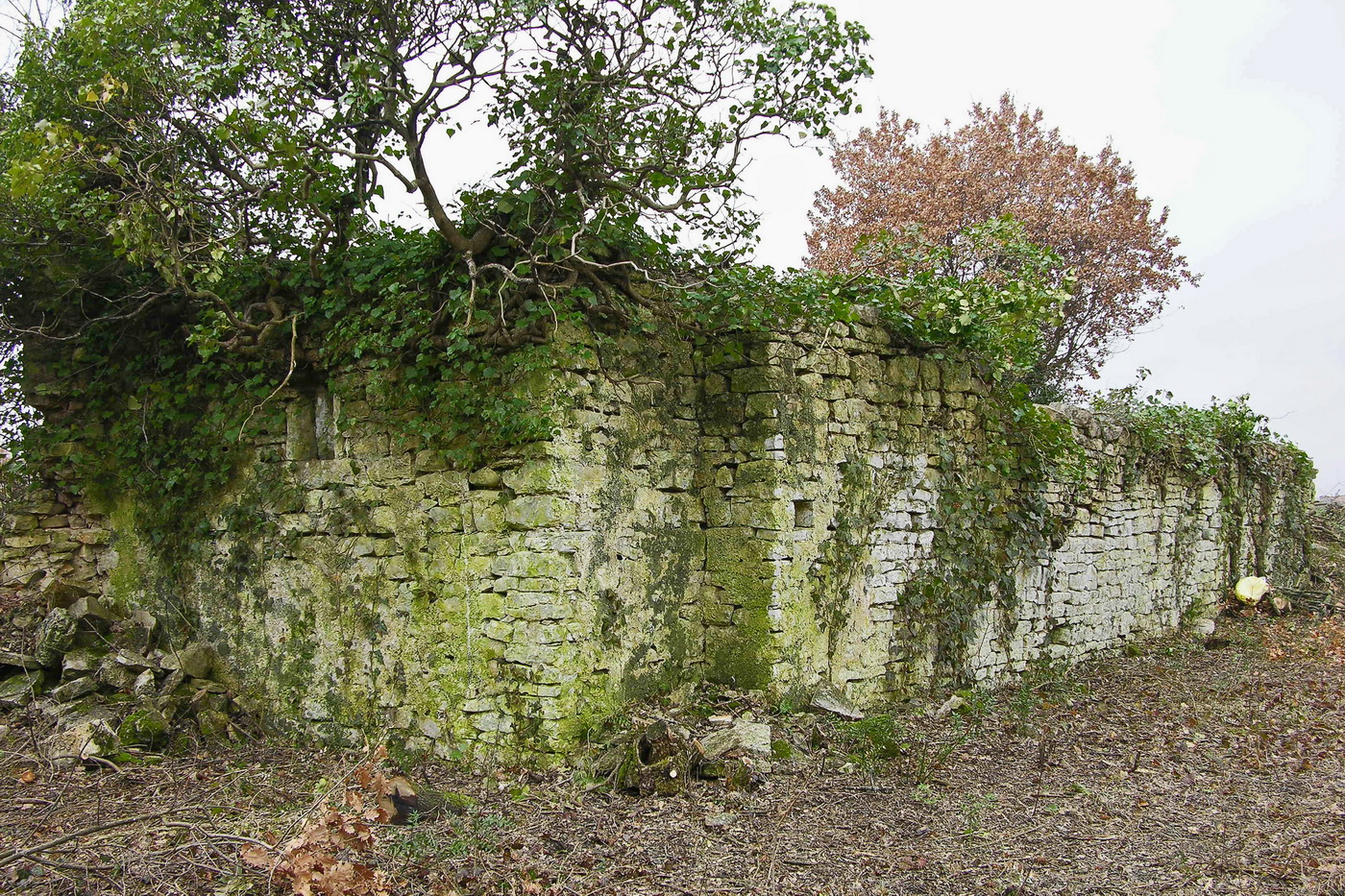 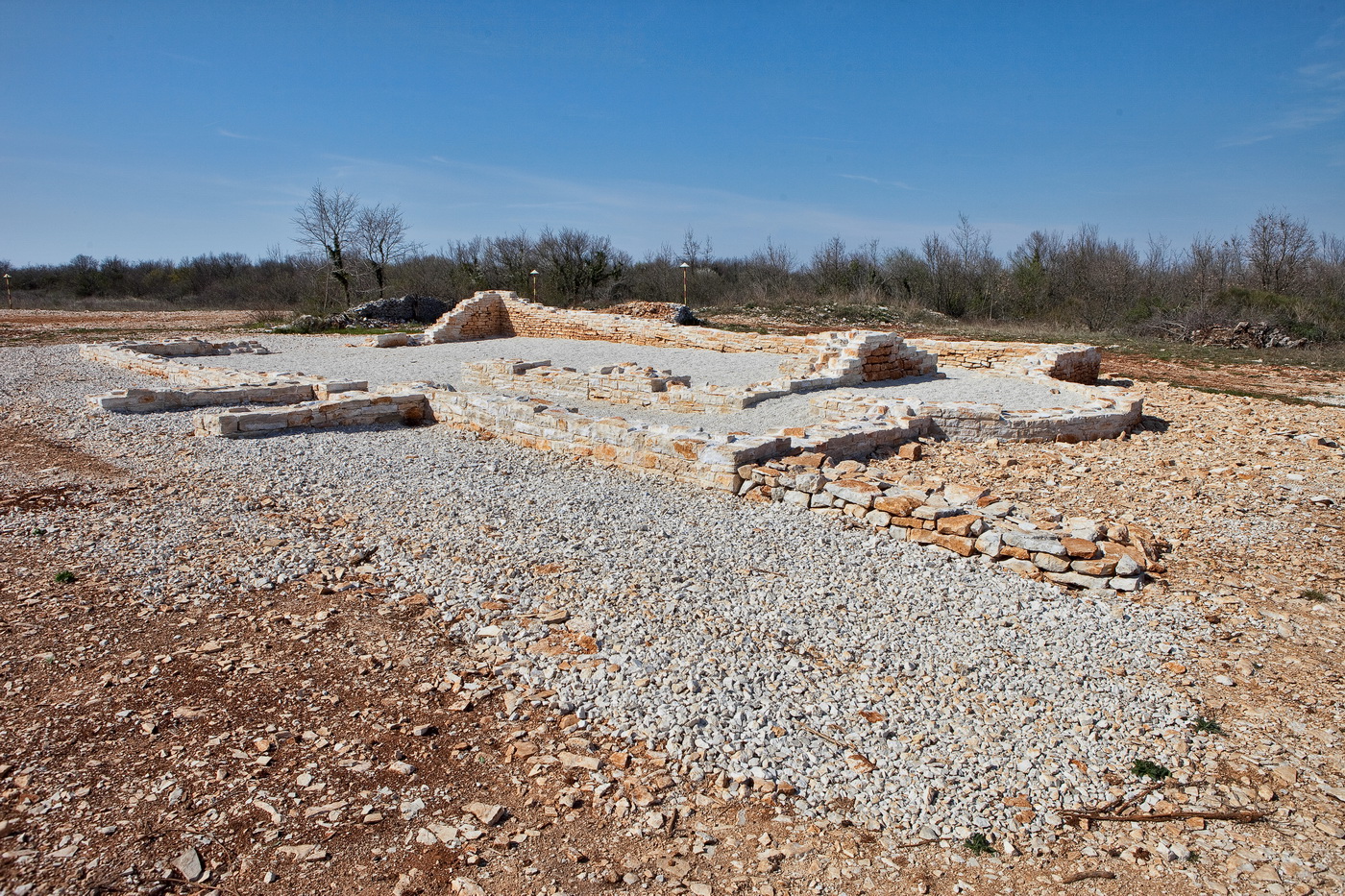 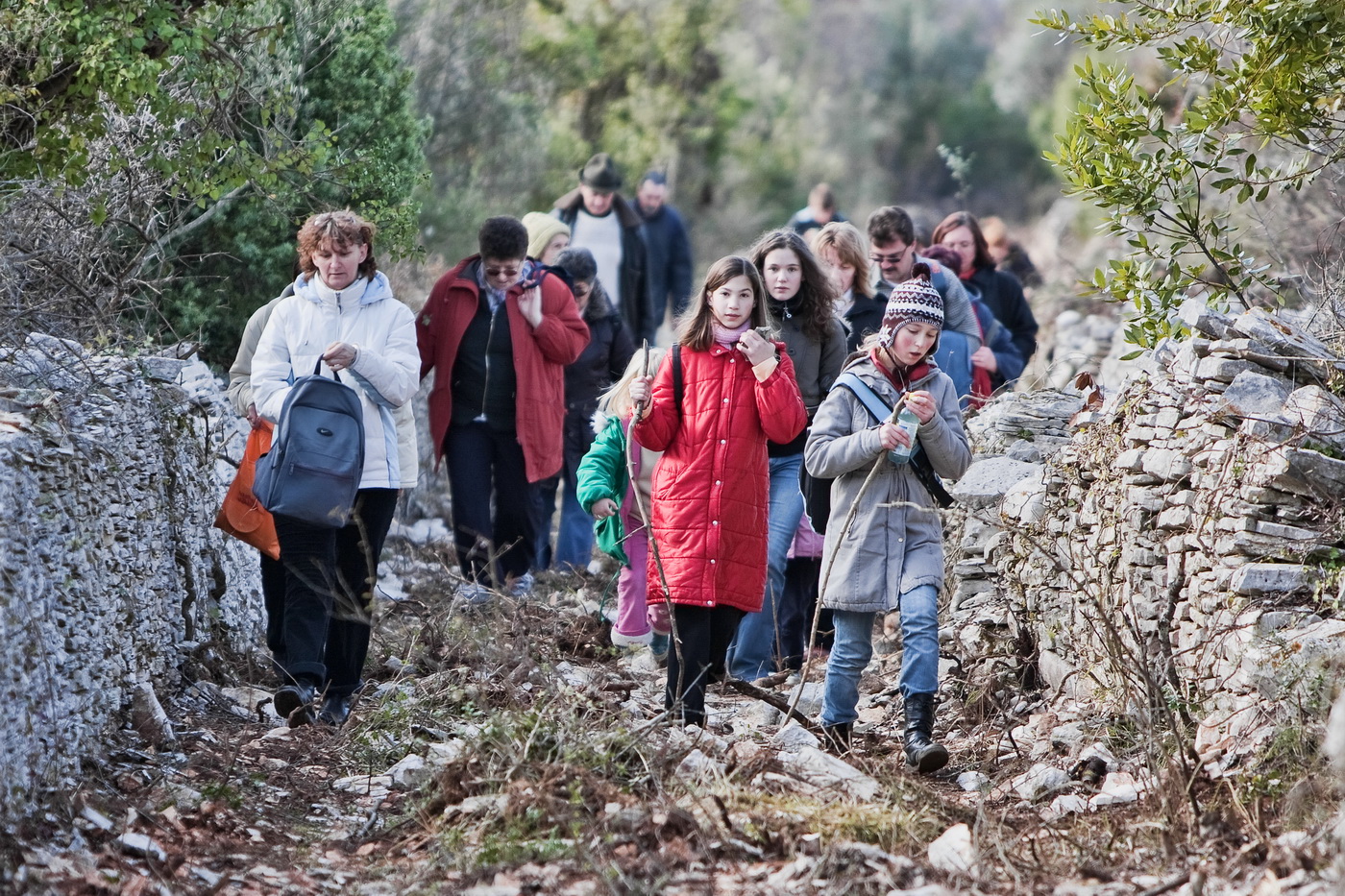 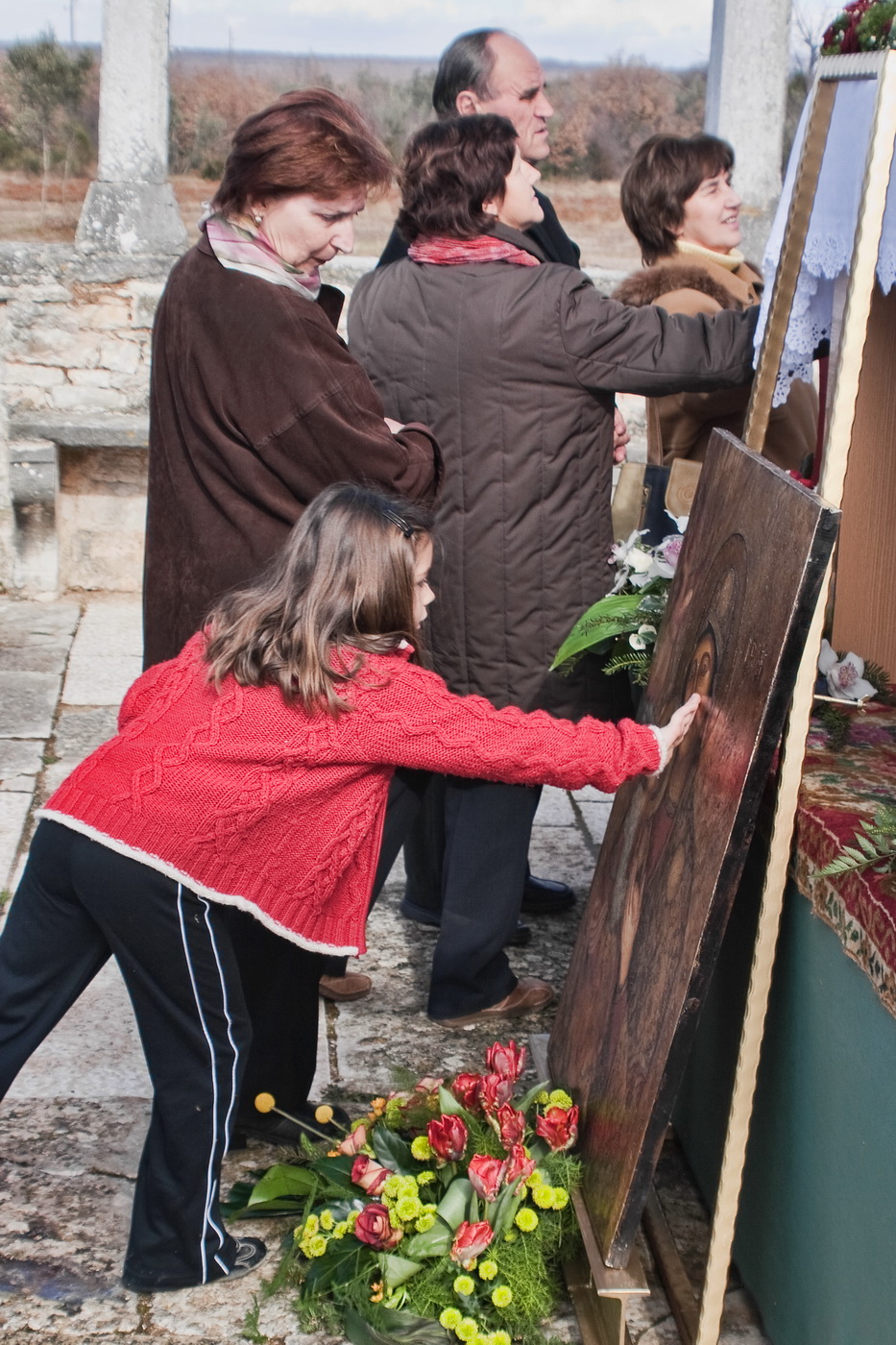 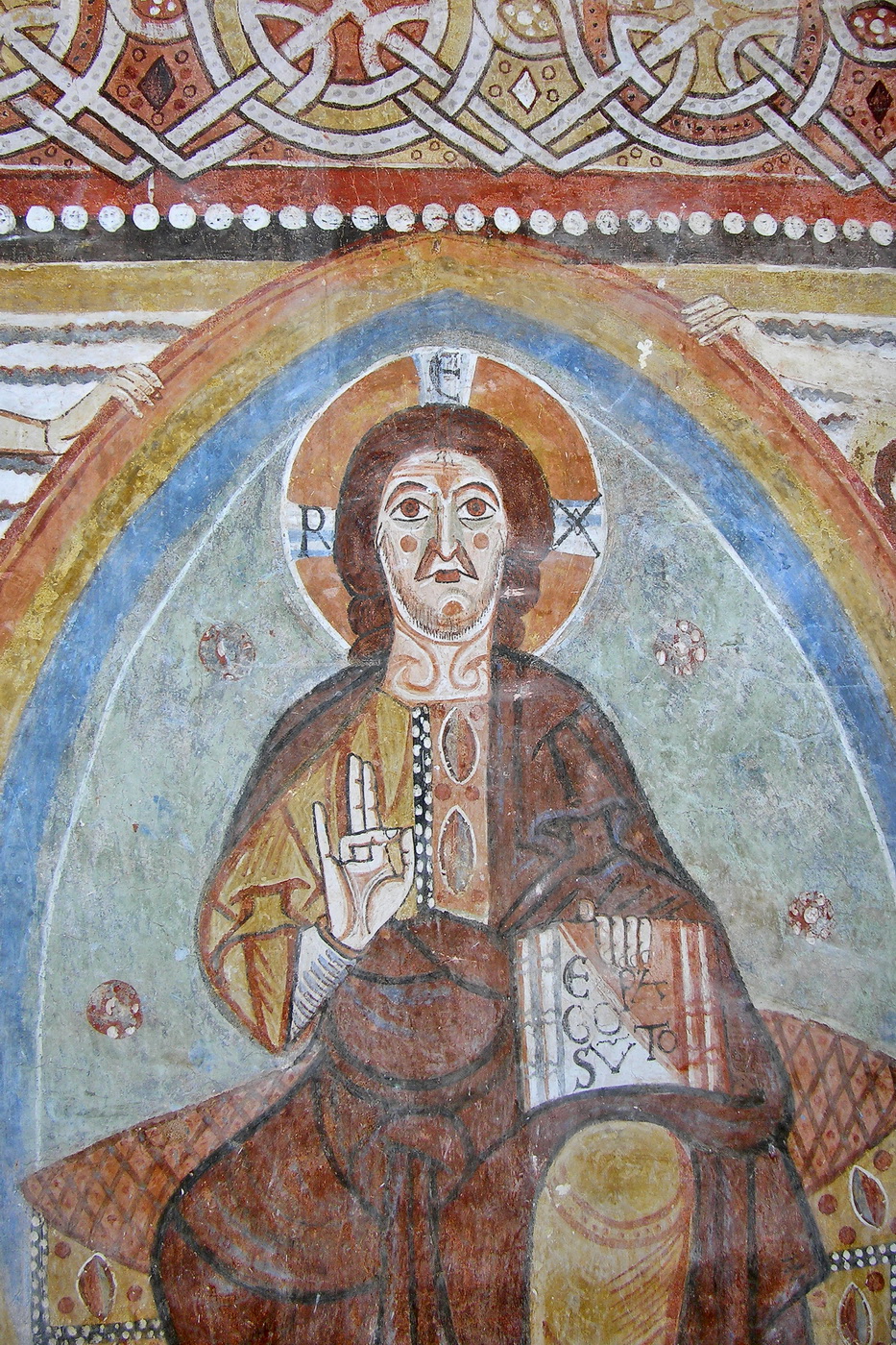